On this occasion, unlike the previous installments of the series, we do not assume the role of a poor orphan who little by little is gaining experience and becomes a hero. In Fable III, we play a prince fighting his brother for the throne of Albion and the ability to decide the fate of the kingdom and its inhabitants. What is important, we are also the heirs of the hero who saved Albion in Fable II. The ruler of the kingdom is also a judge whose task is to resolve the conflicts of our subordinates and decide the path of development of our domain. We will have to, for example, choose between supporting an orphanage or transforming it into a brothel. Improve city sewers or simply direct sewage to a nearby lake. Bad decisions usually translate into popular discontent, but they will secure an inflow of cash, and money is essential to equip an army necessary to fight a powerful enemy.

The action takes place fifty years after the events of Fable II. Throughout these years, Albion has grown into a wealthy kingdom: many new cities were built, while scientists invented a myriad of technological innovations and thus ushered the earth into an industrial revolution. The period is characterized by very rapid technological advances, but also by the exploitation of urban workers and a significant increase in environmental pollution. These are the problems that we will have to face. Having overthrown our evil brother, we assume the throne ourselves and are forced to make difficult decisions ourselves. First, we will take care of the economy and monitor expenses and taxes. Furthermore, as befits a true politician, we will make promises to our people. However, it is up to us whether we will eventually retain them or simply deceive the inhabitants of our kingdom. As you can guess, we will make enemies either way. 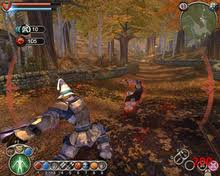